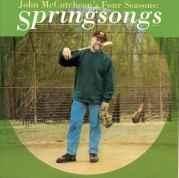 The fourth volume in John McCutcheon's Four Seasons series, Springsongs completes the cycle of the seasons taking us from the melting snows of Wintersongs through to the first signs of summer, where we began the series with Summersongs. Throughout the season, we suffer from "Spring Fever," the frustration of balancing schoolwork with all of the fun which is in the airÃ¢ÂÂfishing, Little League, and just playing outside. It just isnÃ¢ÂÂt easy for a kid to keep concentrated on class work when there is so much excitement waiting just outside the classroom window.

McCutcheon cuts to the heart of the emotions that affect kids during this season. He knows how trying it is to be grounded after school when all of your friends are beckoning you to come along. The recording opens with "I Hope I Make It," expressing a childÃ¢ÂÂs desire to make the cut on the Little League team. McCutcheon evokes other seasonal highlights in "Going to the Prom," a young childÃ¢ÂÂs account of a tomboy older sisterÃ¢ÂÂs transformation for prom day; "Spring Cleaning," in which a father realizes that his childÃ¢ÂÂs accumulated junk is not too different from his own boxes in the attic; and "Snow in April," about one of those unseasonal storms which hits long after the crocuses have poked through the ground.

Throughout Springsongs (as with all of the recordings in this series) McCutcheon sees the world through a childÃ¢ÂÂs eyesÃ¢ÂÂwithout ever patronizing the child. The recording closes and the series comes full circle with "Summer is A-Coming," a rock Ã¢ÂÂnÃ¢ÂÂ roll rave up, suitable for any seasoned air guitarist.

Of course, Springsongs also features the usual high level of songwriting, musicianship, good humor, and diversity of sounds, which we have come to expect from John McCutcheon and his Four Seasons series. (Previous recordings in this series have been acclaimed for their songwriting, performance and production values, as evidenced by the fact that all four have received Grammy nominations and many other awards.)