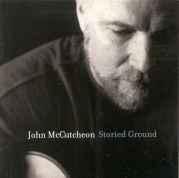 Few contemporary singer-songwriters have written as passionately and consistently of the everyday struggles of working people as John McCutcheon. The Georgia-based activist remains engaged in the communities he sings about. On his 24th album he documents the perils of miners "living their lives in a two-foot seam," decries the loss of small businesses, skewers a consumerist culture "trying to make us buy what we don't want," and celebrates the dignity and heroism of Jackie Robinson and teammate PeeWee Reese. He performs his songs with Spartan reserve, focusing on T.J. Johnson's pert mandolin and J.T. Brown's melodic bass, though he sometimes breaks into caroming folk rock. McCutcheon is a wonderful singer and an underrated guitarist (his fingerstyle work is neat and masterful). But what sets him apart is a musical vision that remains humane, realistic, and unapologetically hopeful.