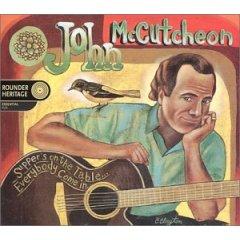 Supper's on the Table ... Everybody Come In!

It is easy to miss what a profoundly influential and important folk artist John McCutcheon has been over the past three decades. He is, in fact, several of the most influential folk musicians of our time; and the giant shadows cast by the trees of his many talents can obscure the forest of his total impact on the modern folk world. McCutcheon is almost unique in his ability to straddle the many branches of the modern folk tree. He is regarded among the preeminent exponents of traditional Appalachian music, and no artist has done more to popularize the ancient and very American sounds of the hammer dulcimer. He helped revolutionize the children's music market, bringing a state-of-the-art production and compositional sophistication to the acclaimed family recordings that have earned him five Grammy nominations. He is equally esteemed as a topical songwriter; his vivid ballads of real-life triumphs and travails are as much a template to political songwriters of his generation as the songs of Woody Guthrie or Phil Ochs were to theirs. This album collects a broad sampling of John McCutcheon's recordings of the past decade, with two newly recorded tracks.