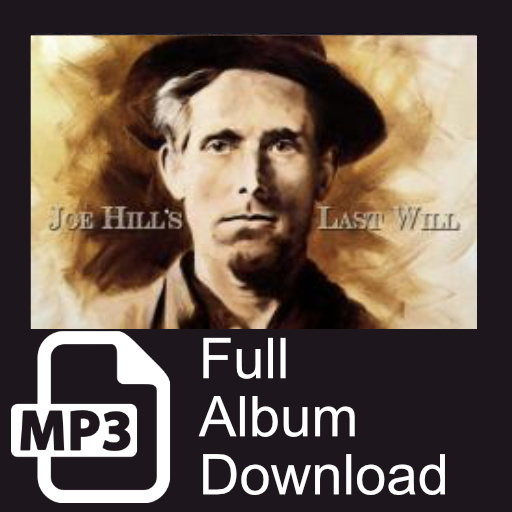 Joe Hill was a songwriter for the Industrial Workers of the World, the Wobblies, back in the early 20th century. He was the ultimate utilitarian songwriter, composing pieces to be used at meetings and picket lines and rallies. He wrote songs to be sung and to be used. To be useful. His songs "The Preacher & the Slave" and "Casey Jones, the Union Scab" are what some people know of his work. But veteran folk musician and longtime labor activist, John McCutcheon, has released an album bringing Joe Hill's music to a whole new audience. With fresh arrangements, stunning musicianship, and released on a palette that makes these songs feel as though they were written today rather than a century ago, there is a life and vitality that is both rare and refreshing.

Joe Hill was executed by a Utah firing squad at dawn, November 19, 1915. This album is being released in honor of the centenary of Hill's death.

Casey Jones
Itâs a Long Way Down to the Soup Line
The Tramp
Joe Hillâs Last Will
Mr. Block
What We Want
The Preacher & the Slave
Overalls & Snuff/The Connaughtmanâs Rambles
The Wooden Shoe/Ta Ra Ra Boom De Ay
The Rebel Girl
Stung Right
Where the Fraser River Flows
There Is Power in a Union