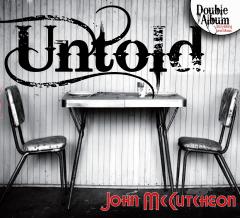 This special double-CD release is the first recording that shows the breadth of John McCutcheon's gifts. "Untold" features one disk that was recorded live at the 2008 National Storytelling Festival. It is the first in-depth exploration of John's prodigious gift as a storyteller. The second disk features three refugees from the soon-to-be out-of-print "Stand Up" and "Hail to the Chief" and a wealth of new songs audiences have heard in concert the past year. Of special note is a re-recording of "Streets of Sarajevo" with accompaniment by Vedran Smailovic, the Cellist of Sarajevo, a beautiful duet with Suzy Bogguss on John's "Old People in Love, " and the much-requested "Sara Tucholsky."