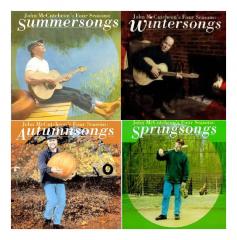 From the very beginning, John McCutcheon's Four Seasons was going to end up a boxed set. When each of the seasons became Grammy finalists...a first for every element in a boxed set...it seemed even more inevitable. Then Concord Music Group bought Rounder Records and the project when the way of all the best-intentioned plans. In honor of the 20th anniversary of the recording of the first installment, Summersongs, Appalseed is putting together another first: an Un-Boxed Set. All four of the Four Season sold together.

John and his co-writer, Si Kahn, have created a full year's worth of incredible songs, stunningly performed by a seasoned band of John's mates, and given us anthems to swimming holes and rivers on which to ice skate forever. Let's watch the Perseid Meteor shower and then the Northern Lights. How 'bout the angst of being the new kid in school come September and then suffering from Spring Fever mere months later.

This collection is a classic in children and family music, honored by the American Library Association, Parents Magazine, Parents Choice Awards, and many more...and, of course, the Grammys.